Self Defense and Kids Continued

First off, sorry I am so late with this post. Also, before I begin I'd like to remind you that my experience is the basis for most comments you will read on this blog. Please remember that the children change drastically between the ages of 5 and 13. Most of our new students are between the ages of 5 and 8. Once they are older, and / or more experienced, their learning curve will reflect that. Now, on to the self-defense:
Did you try the experiment I recommended in my last post? Either way, read on.
When children are young, and new to training, learning their self defense can be confusing. 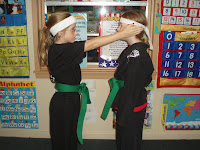 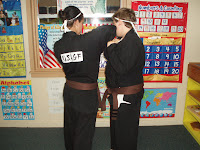 All of us, as black belts, have favorite follow up techniques. Who doesn't love a well placed empi or a timely used earclap!

It has been my experience that too many choices in follow up strikes can cause confusion, and lack of spontaneity in new, young karateka.
I have had really good results by using the same follow up strike series with all their techniques. It sounds boring to us, because we thrive with many options. However, too many options with young, new white belts is an invitation to confusion. Students age 5 – 10ish, rank 9th kyu – 7th kyu (the first year of training) could build a strong defensive plan based on a few follow up ideas.
The strikes I use are the shotei and a heel stomp. 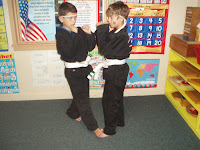 However, there are many simple combinations you could use. If you are not already incorporating this idea, try this experiment:
As I mentioned in the last blog. Go into your dojo and do some self-defense with your beginners. Then do a “game” of reactionary drills at the end of class. Pay specific attention to the follow up strikes. If the strikes are slow to come, or tentative, try teaching the same strikes on EVERY grab for the next month. Then play the “game” again. Hopefully, you will see a difference in the young, novice’s ability to retain this important information.
Two of my favorite ways to practice (and observe) what self-defense has been memorized are reactionaries and bunkai.
Reactionaries
This is simple. Place all the children in a circle. Using yourself and your helpers walk from person to person and do all the grabs you are teaching (front extended, rear extended, wrists, bearhugs, and the punch). Don't tell the kids which one you are going to do, of course. See which children remember what. I like to encourage children to run after they hit back (follow-up). This will be a necessary addition in the event of a real danger. 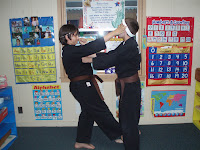 Bunkai
We all know what bunkai is. However, where kids building bunkai with kids is concerned there are a few pointers that might come in handy. Keep it simple. Let them do the inventing. Let them have fun. Don’t think too much about how it reflects on you. If it seems silly to you, it is probably pretty cool to them. I would like to remind you to teach your children two of the old traditional ideas regarding bunkai. The first one is: whoever starts the fight loses. We all know this. It is a basic in karate because karate is defensive. The second tradition is that the higher ranking person is the defender / winner. Once the kids understand that rank traditionally wins, I break the rule often. I do, however, think it is important to pass those traditions on to the next generation.
Now I'd like to digress in two directions. First, I would like to talk about the youn 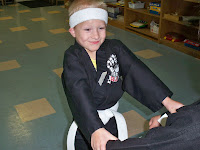 ger child.
Have you ever had a problem making the child understand if he (she) was the uke (bad guy) or the defender (good guy)? I call self-defense good guy / bad guy for the first year of training. I have noticed a specific pattern where children age 5 and 6 have trouble understanding which roll they are in and what to do in that roll. One trick I have used is to “mark” the bad guy (uke) with a piece of tape. (Look closely at Brandon's gi in this picture.)
Then the beginning child knows that when he is wearing the tape, he is the bad guy (ike) and he doesn’t do the follo 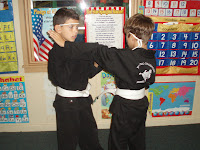 w-up strikes. This has cut down on chaos.
Another area that I have modified for my younger kids is aim and follow through. It is my opinion, that when kids are very young, they don’t know (nor maybe should they) how to pull or control their strikes to the face. To that end, when I am having the children aim shotei strikes, I have them aim beside the face and use complete extension of the arm. I tell them this: “Fake bad guy, fake face; Real bad guy, real face.” Has your experience in children’s self-defense been very different?
Now I would like to spend a minute on older children. These kids have been training a year plus and are 6th kyu or higher. 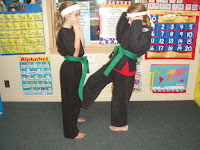 The first thing I’d like to cover is that it is definitely time to add variations to the follow ups. I have done this with older children (9 – 12) that are still quite young in rank with good results. I like to have the basic follow-up strike pattern memorized as a back up. However, older children like everything from ear-claps to elbow strikes, to groin strikes. They get psyched at the idea of defending themselves.
With the 6th kyu and older, I have also had good results when I began adding new techniques. An example of this is in the wrist grab. My standard t 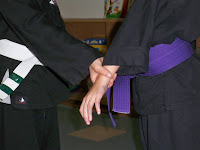 echnique for a wrist grab is “point upward” with a heel stomp, palm heel follow up. The next addition, when the child is ready is two-fold.
1. I explain how the point technique works, move the thumb placement as the uke (bad guy) and begin the road to understanding technique. The photo shows a reverse wrist grab.
2. I start to work some standard adult information. Exa 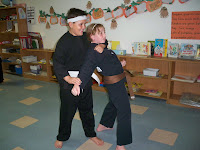 mples include a traditional Goju technique called tiger neck takedown (a child favorite) and an old straight punch technique where the follow-up is four elbow strikes.

All the while, with kids of all ages, like you, I’m working traditional mat work: break falls and rolls. This will prepare them for the falling that is involved in the harder techniques and the wrestling that is to come.
I’d like to close by listing some bullets:
1. When children are new to karate and under the age of 12, it might help NOT to allow too many choices in their follow-up strikes. Keep it simple and build confidence for the first year.
2. The two “games” that test how they are doing are one where you are the attacker and they must react without previous knowledge of which attack is coming and bunkai.
3. Continue to do basic mat work, of course.
4. Just like the kata become more difficult with time, the self-defense becomes more intricate as the rank and age increase. This intricacy is two fold: more techniques and more variation on each technique.
Please write me at kickswithkids@aol.com and give me some feedback. My next two posts should appear much more quickly. I will be sharing some of your comments. Also, I will post a flyer I handed out to some of my first helpers in the late '80's.
Let's keep creating strong children through karate.

Posted by Sensei Michelle Darbro at 8:49 AM No comments: