I woke up this morning happy because Hurricane Sandi makes it possible for me to write. (School was canceled.) My mind started churning through ideas and concepts where teaching is concerned. One of the beautiful things about being a Karate teacher is that my youngest student is 3 years old and my oldest student is….well, old enough to be revered. In comparing the two types of classes, I realized that a couple of trite sayings really define the making of a great kids teacher: “Don’t phone it in.” and “Be in the moment.” This stream of consciousness reminded me that one of the biggest differences in teaching kids and adults is this:  In the adult class the technology rules the class. If students bring in a mood or an injury – we push on through and focus on the class content. However, in a children’s class, the children need to be the most important thing, even at the cost of not getting everything done. At least 50% of the time, I’ll forfeit some of the content I have planned because there is a subject that needs addressing. Ready or not, it takes some of the training time. That interruption could be anything from hitting each other without Sensei’s watchful eye making it safe to fear of something new I’m going to try, to a completely discourteous attitude. In any situation like that I need to stop rushing through the technology.  I need to mentally go to where the kids are, allow them to understand my concept, and then be able to carry all of us together to the next thing.

Another difference between training my adults and training my kids is that I rarely plan what the adults will do in advance. When I see the class, I figure out who is there, what they need, and how many teachers I have to accomplish it. Then we do it. I plan the children’s classes a week at a time. I always know what katas people are learning and what level of self-defense students are on. What I switch often is how we warm up and what we do at the end of class. (See many posts for ideas.) What has been happening for over a month now is that I have to adjust the plan constantly even as I am teaching. This is easy to say, but doing it is challenging. I’ll use my last two nights as examples:
In a class that usually has 10 kids and 3 teachers (I’m spoiled), I had 17students and one helper. Instead of dividing into work groups, (my original plan), I kept the group together with my helper in charge. I took out the most experienced students. I worked on their level of technology and then had them help teach the younger students. This isn’t rocket science, I know, but it did entail thinking on my feet. What that means is that I needed to clear the baggage from my head, and quickly think of how to BEST take care of EVERYONE in the room.

The next night I normally have 15 children and 3 teachers. Due to the storm we had 10 children and 5 teachers. Everyone was ‘antsy’ because of the stormy weather. I dropped my original plan (standard warm up, kata groups, and sparring) and told the kids we’d start the day with their favorite game. We did. Then I said when they go out to their teacher they’d need to give as much energy to their work as they did to the game. They did! We continued like that: play with punching bags / work technology/ play with blockers/ work memorized movements until we did our final game. For that I mixed two games together (because they requested one and I wanted to spar). I had never mixed group jump rope and sparring before, but hoped it would work. It was great! We used my group jump rope (see the post from 7.29.09) and when you ran out you ran directly into an adult sparring partner.

Again. This wasn't overwhelming. However, I needed to BE THERE and see what we were about IN THE MOMENT. I needed to remember what I wanted to accomplish but have alternative ways to get it done. The challenge with adults is so different. They’ll adapt to the technology offered. The saying goes that when you bow into the training area (dojo) you leave your troubles and ego at the door. Children don’t know that. Adults (even teachers) aren’t perfect at it.  I’m lucky to be able to teach both because they complement one another. Children keep me grounded and living in the now and adults challenge me with their desire to understand the way of karate.
Oos,

Posted by Sensei Michelle Darbro at 9:19 AM No comments:

“Cause I’m bigger than you.”

Thanks for taking a few minutes to read this. It has been way too long. Life has been crazy, don’t you think?
A couple of years ago, I was standing in one of my schools and I heard the student ask the teacher why he had to do something. She responded with the title words, “Cause I’m bigger than you.” In defense of the teacher, let’s agree that sometimes we can all be flippant and impatient with students. Because I’m asked to have specific conversations with children about their behaviors in class and at home, I’ve put quite a bit of time into thinking about the most effective way to communicate with them. I’ve noticed some interesting truths. Even if you aren’t asked to talk to kids about their attitude and choices outside the dojo, you might find my experience and the resulting conclusions interesting.
Talking at Kids 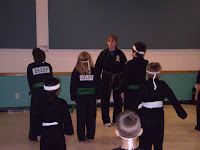