Has your year started out with a bang? My dojos are growing and changing constantly, as it should be. Before the holidays, I was talking to one of my kid’s classes about the activities (games, exercises, drills – pick your favorite word here) that I run at the end of class. We had an impromptu vote on which activity was anyone’s favorite. Here are the top seven (in no particular order), according to my Friday afternoon class:


Sparring
Description of Drill: Everyone knows sparring, I am sure. So I will quickly mention one thing. To me, the most difficult part of sparring at the children’s level is teaching them to hit adults hard but use control when they are with one another. What do you think?
When to Use it: Sparring is versatile. It fits in all parts of class; beginning, middle, and end. Sometimes I start 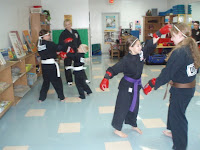 a children’s class with sparring. Then I’ll run exercises at the end of class. (When I do, I play a crazy game for the exercises portion. I will discuss that in another post.) I’m sure all of you have spent the entire class sparring. Sixty minutes of sparring works great with older kids, but isn’t as good if the kids are young and have a short attention span. Traditionally, sparring comes in the last 1/3 of class.
Other Details of Interest: Too many details, too little time. So, here is a tidbit of interest: Do you remember that in the book The Karate Dojo, Peter Urban mentions that someone who is a good fighter is generally not great at kata and visa versa? What do you think about that? I definitely try to raise students who value and perform both equally. It is a challenge.


Throwing Weapons
Description of Drill: This one is easy. We already do it in every weapons seminar. All weapons can be thrown. I choose which weapons to throw and what throwing game to use based on the age and rank of the children. Young children (5 ish) do best with escrimas. One step older, and more experienced and I can add bo. Add another year or two to the children’s age and I can move on to sai….etc. We all know that weapons can be thrown at an object and to a partner. Both games are popular in my dojo. As a change, I will sometimes let the kids throw bos and escrimas as far as they can, ju 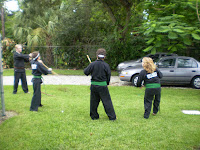 st for the fun of distance.
When to Use it: This is an end of the day game for sure. I usually use it at the end of a day where one of two things has been going on. 1. I’ll use this game when we have been working weapons. 2. This game also works at the end of a day when we have been focused all hour on a difficult, detailed concept and everyone is worn out. This game doesn’t take long (10 minutes?) and it is exciting for kids. (After all it made the top 7, out of about 20 different choices!)
Other Details of Interest: This will be the first time that some of the children have been near a target event (throwing at an object). It will definitely be the first time they have been allowed to throw weapons to another person. This is a perfect opportunity to emphasize safety, courtesy and self-control in students. I like to address these aspects before the event. That way, if the students lack one of these important characteristics, they are aware of what I expect. Therefore, the conversation, and punishment, that follows will not be a surprise. A few important things you might mention include these: When throwing and catching make sure you throw TO the partner and not AT him. When throwing at a target make sure everyone who isn’t throwing waits behind the throwing line.


Break Through the Wall
Description of Drill: This is a variation on Red Rover. This is how I play it: All my adult helpers and I make a “wall”. This kids break through the wall one at a time. They should us 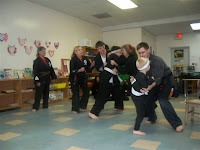 e their wit, power, kiai, and any strikes they want and can remember. (I tell my adults to cover their teeth and their groin.)
It is exciting and adventurous for the kids and it builds fighting spirit. A little craziness is a perfect way to end a day.
When to Use it: This is an end of the day game. It takes quite a bit of time (about 1 minute per child). So you have to allow enough time to give everyone a turn.
Other Details of Interest: This game builds confidence and releases power without restriction. It is loud, fun and a little unpredictable. As the children grow older (11+) they will begin to transition from wanting to break through the wall, to wanting to become part of the wall. This is one of the signs that they are ready to move into the adult class. 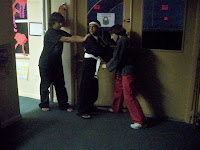 Insanity rules in this variation of a haunted house. Basically, my helpers and I turn out all the lights and invite the children one at a time to come in one door and get out the other. We incorporate the blockers, punching bags, noodles and some basic grabs into the obstacles that the kids need to maneuver as they make their way from the front door to the back. We also take into account the children’s age and rank when we decide how difficult and scary to make the adventure. 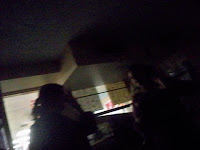 When to Use it: The last game of class is the best place to put the dark game. Like break through the wall, this drill is time consuming. I like to allow a few minutes after the game to talk about it. Everyone will want to mention their personal experience. Then I mention how weird it is when it is too dark to see what is going on.
Other Details of Interest: This is a variation on a drill Master Kelljchian used to run with us. The drill then was done at night, outside, and usually accompanied a lot of injuries. I keep it a little safer for my kids. This last pic shows what it looks like to the kids - Very Dark.

Blocker vs. Blocker
Description of Drill: Hand each child a blocker and let them strike at each othe 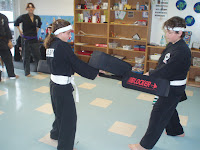 r. Before you let them start, explain that the soft part of the blocker is the hitting part. If they hit with the handle it will hurt them both. (Inevitably, someone will catch their finger in the clashing handles, but at least you warned them.)
When to use it: This game fits in the middle and at the end of class. It is a great stress reliever if you have been focusing on technology for a long period. Or, it is a treat instead of sparring at the end of class.
Other details of interest: The kids call this playing “star wars”. Try it once and watch their excitement. Let me know if your kids love it as much as mine. 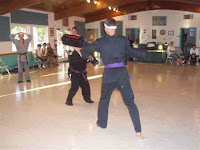 ed Blockers
Description of Drill: Each participant has a double ended blocker and they block and strike each other for an allotted period of time. I keep my matches under 45 seconds to keep the injuries down.
When to use it: It is an end of the day game. I use it about 4 times a year as a special event.
Other details of interest: This game requires 4 blockers and 2 couplers. This is about a $50 or $75 investment. I think it is a good use of dojo funds. Managing a stick that is almost 8 feet long is a challenge, even for the older children.

Bunkai
Description of Drill: We all know what bunkai is. (Please excuse any spelling vari 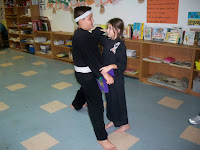 ation that you disagree with.) A quick definition would be that basically, we choreograph a fight for the kids. At the end of the class, everyone performs their bunkai (with proper bows, of course). This activity is a big hit with our parent audience.
When to use it: I usually put bunkai at the end of a day when I have emphasized self-defense techniques. Obviously, I use the techniques I taught that night in the bunkai. This gives the kids a chance to do the techniques spontaneously, thereby learning that things rarely go as planned!
Other details of interest: Bunkai builds many skills that I want in my students. It is creative, builds independence, and reinforces the memory of self-defense technique. This also builds leadership skills in the highest ranking person in the group (which is not necessarily the most outgoing person in the group). For variety, and as the kids get older and more experienced, try incorporating weapons into the bunkai.

One more note: I try to do sparring every third class. That allows me two classes to do another game (activity) with the kids. There are a few reasons why I do this. I have found that if I do sparring every week, it becomes too common and the kids take it for granted: thinking of it as wasted time, or play time. Also, there are many aspects of training that can be strengthened from another game. A few of these aspects include: agility, power, coordination, creativity, and even courage. Finally, I have found that when kids shy away from sparring, they often rise to the idea of blocker v.s. blocker or the dark game. There is something for everyone if I use all the activities available.
Thank you for continuing to read my ideas and thanks for any feedback. Write me at Kickswithkids@aol.com.
Posted by Sensei Michelle Darbro at 3:45 PM No comments: