A Weapons Class for Variety and Fun

Oos,
Hope 2010 is giving you plenty of opportunities to grow as a teacher and as a karateka. I would like to talk about weapons. (Stay with me for a sample “class” for your use and enjoyment.) Most of our Goju syles do weapons in some form. For example, USAGF has weapons seminars that the children can challenge themselves by attending. I have found that anothe 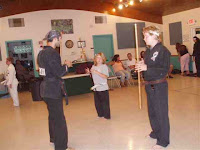 r way weapons can be used to the benefit of the student and teacher is by including them (especially escrima and bo) as a tool to change the stretch and exercise routine. Using weapons at the beginning of class is a great way to introduce kids to the responsibility needed to handle something that is potentially dangerous. It is also a great way to get around the boredom of repetitive exercising. And, another benefit is that touching the weapons often builds hand eye coordination. I will talk about two different plans that can incorporate weapons into the children’s routine.

Plan 1: There are only two of us teaching. One of us runs an entire class based on weapons, while the other person takes out individuals or small groups for their kata / rank technology work.
Plan 2: If I have enough helpers, I can spend the first third of the class stretching, exercising and doing basics with the weapons. The middle of the class is used for rank oriented kata and technology. I use all my helpers and we divide the kids into small groups. Each of us does what we can to impart a little more technology to each child. Finally, at the end of the day we will either throw the weapon or build a simple weapons bunkai. I decide which “game” based on the amount of time left in the class.
Having said that, here is a sample class:
Let’s start by saying that I am assuming that one person will be running weapons for 50 ( out of 60) minutes. Another teacher will be pulling small groups for Rank based work in 7 – 10 minute increments. (Plan 1.) Here is a suggestion on what to do:
You will need enough escrima sticks for all the students. Spend the first 2 – 3 minutes explaining that this is a real karate weapon. Not a toy. The escrima stick really hurts people. Therefore, it cannot be played with at all. No swinging, flipping, twirling, or throwing without permission from Sensei. This is how I want you to stand while I explain what we’re going to do next…. And show them how to stand in keoske.
Even though I am including a fairly detailed workout, don’t limit yourself to my choices. Use the lists below as suggestions.
Start with stretching, exercising, and dexterity. (12 ish minutes) When I do this part of class, I don’t lump all the exercises together. I do a stretch, an exercise, and a dexterity. Then I repeat that. The children in this workout situation are not required to understand which is the exercise and which is the dexterity. So, let them have more variety and fun! Here are some suggestions: 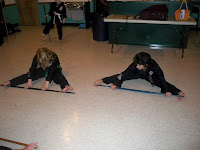 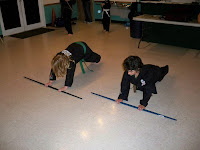 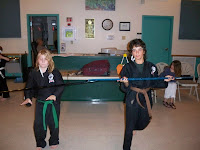 Dexterity: Throw from hand to hand, Finger twirls, Alternate catches, Pass behind back, Balance on one finger and catch,
180 degree throws

Now show a fighting position, some blocks and some strikes. (15 minutes) Here are some suggestions:
Weapon vs 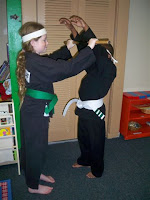 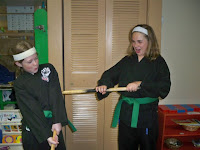 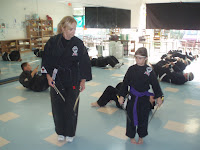 at your helper has been pulling small groups for their rank technology throughout all this weapons work. Each group has missed some part of your work. However, it is my experience that the kids have enough time with me to be ready to push on. At this point we are somewhere between ½ and 2/3rds of the way through class. This is where you must assess what else you can get done. In order to do this you will want to answer these few questions: Did helpers show up? Do you have more or less than a dozen kids in the room? Have you got some higher ranking kids that can lead and essentially help you? Depending on the answers to the questions, pick between:
a.Taking the kids outside and letting them throw the weapons. Or:
b.Dividing them into small enough groups that they can build little bunkai based on the technique you were teaching. If you have helpers and ½ the class left, you can build the bunkai and watch all the skits. It is pretty cool.
If you don’t 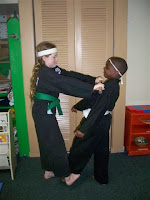 have time to build bunkai, the kids will really love throwing.
At the end of class, you will have a great opportunity to teach the group about the courtesy involved in bowing with weapons. They can sit in their formal kneeling position, show respect to the weapon, meditate, and bow…. All with the weapon.

If you want to apply the above workout in “Plan 2” the adjustment is easy. Shorten the times to allow a technology station in the middle of class. It will go something like this:
10 minutes to introduce the weapon, and do stretch etc.
7 or 8 minutes for the striking drills.
10 minutes of technology work.
10 minutes to build bunkai, 10 minutes to watch in and 5 minutes to bow out.
If you want to throw the weapon instead of building bunkai, you can add time to all the other stations.
I hope you all find success with this workout. Keep me posted on how you are doing. Did you find success with this workout?
Oos,
Posted by Sensei Michelle Darbro at 5:59 PM 2 comments: